This project has undergone considerable change since inception due to COVID-19. While in lock-down, I spent a lot of time re-conceiving the project. Applications for the NYCDH Graduate Student award were due June 15, 2020, and served as a timely opportunity to draft and project proposal. I recently learned this project received honorable mention in that competition.

This project proposal serves as an explanation of the project, and as it’s guide for going forward.

Neighborhoods across Queens have undergone dramatic changes in recent decades, meanwhile multiple city-led project proposals stand to provoke further change. In response, neighbors have joined together in opposition and to advocate alternative futures. Recalibrating Queens seeks to better understand this present moment and possible futures by excavating the borough’s past. The excavation begins before Queens was “Queens” and extends to today by reading through the various histories documented by current and former inhabitants – from the Delaware Indians, to the early settlers, to residents today. As I go, various digital tools like Leaflet, Timeline JS, and PressForward will be integrated with the existing WordPress site to create a rich, multimedia environment through which others can join in on the interrogation. I will also (continue to) share my observations, speculations, and findings as downloadable resources, op-eds, guest blog posts on other sites, social media posts and more. This digital, historical, activist, scholarship project is dually rooted in the organizing work I do in Queens with the Justice For All Coalition and my dissertation work as a doctoral candidate at The Graduate Center, CUNY.

This spring, this project received a startup grant in the amount of $4,000 from the Provost’s Digital Innovation Grant of the Digital Initiatives at The Graduate Center (GCDI). The majority of this funding was used to purchase a laptop powerful enough to handle the programming and web development work that undergirds this project. Additional money was used to pay for web-hosting, a domain name and an external hard-drive.

Long Island City has undergone extensive transformation in the last two decades. In part due to three Bloomberg-era rezonings, the neighborhood’s manufacturing past is now overshadowed – literally – by luxury residential towers and hotels, boutique commercial spaces, and corporate headquarters. Under de Blasio, proposals for multiple megaprojects prove the area continues to be a central development target (i.e. BQX, Sunnyside Yards). Changes have driven up housing and living costs, and threatened or ousted residents, small businesses, manufacturers, and artists. Meanwhile growing density strains neighborhood infrastructure. In response, resident groups have coalesced to advocate for community needs. While LIC is a hyper example of the changes afoot, similar pressures and resistance is common across the borough.

Recalibrating Queens seeks to better understand these development dynamics and grassroots contestations and provide another counterpoint in the debate by excavating the longer history of development and change across the borough. By relying on a mix of data including archival, historical, statistical, spatial, administrative, narrative, and ethnographic, the project aims to build a thick, complex, and pluralistic understanding of the borough’s past, so as to reframe the contemporary moment and imagine alternative, just futures for all.

Practically, the project is organized around two tracks of inquiry. Track 1 examines and documents recent history, which roughly means from 2000 to today. Track 2 examines and documents a longer history, beginning with just before European contact and moving forward to the present moment. It will look at how our settler colonial state was created and reproduced over time, while also contested over time. It will also attend to the relationship between settler colonialism and racial capitalism – past and present.

While these tracts are conceptually distinct, they are being pursued simultaneously as “Phase 2” of the project. Phase 2 also includes a new WordPress website where new and old data, resources, and writings are shared. To curate information for a public audience, I integrate tools like ArcGIS StoryMaps, JS Timeline, Map Maker Plus, and PressForward with the website. Content is then shared more broadly via community presentations, op-eds and guest blog posts, and Twitter.

Phase 2 follows Phase 1, which explored and mapped publicly-available data showing changes in housing and population in 2000 and 2017. The culminating series of 65 maps generated in ArcGIS were accompanied by an ArcGIS StoryMap that offers context by pointing to city-led land-use decisions during the same timeframe. These resources also live on a WordPress site – https://recalibratingqueens.nyc/drafting – where I experimented with how to display and contextualize the project for a public audience. Doing this work provided many insights into thinking about the future shape of the project; as did presenting the work in the Fall of 2019 at the Mapping (In)Justice Symposium held at Fordham University in and to an undergraduate class by the same name hosted by one of the conference creators.

During both Phase 1 and Phase 2, I have desired to use more flexible digital tools like the Javascript libraries of Leaflet and StoryMap, which can provide the developer with more control and possibility. While I have continued to experiment with these libraries, and learn more about web development more generally, Phase 3 – a future phase – will enact this ambition more fully. The larger goal here is to create a rich, complex, user-centered environment through which the public can engage with the research. While drafting and storyboarding content for this next step is already underway, I expect this to be the bulk of the work starting in the fall of this year.

In the fall, I also expect to have a better idea of what Phase 4 will look like; maybe a final iteration to wrap up the project in a meaningful way, or perhaps another rabbit hole calling forth future phases still. The open-ended quality of the project is tied to its underlying nature, which is both activist and scholarly. More to the point, Recalibrating Queens was conceived alongside my participation with the Justice For All Coalition, as a resident of western Queens who has intimate experiences with housing insecurity and displacement, and it is the basis of my dissertation work as a doctoral candidate in the environmental psychology program at The Graduate Center, CUNY. While the first 3 phases will constitute much of the dissertation research, recent history suggests community contestation will be ongoing.

The nature of the project also situates the work alongside others at the intersection of public, activist, digital, historical, and urban scholarship, and makes it another useful case study of what “being a scholar in the digital age” can mean and and how it can manifest (i.e. Daniels and Thistlewaite, 2016). One inroad that has emerged already is the tension between process and product in public scholarship. In contrast to the focus on multiple products for multiple audiences, I find the curation process useful for my own learning. The act of composing an educational product for a public audience is an analytic process that brings me closer to the data, while firming up my understanding, and ultimately creating a reference point that I can return to in the future as needed. Moreover, I am thinking a lot about how this web-based project relates to my dissertation and other traditional, text-based academic products. Elaborating why I don’t think this replaces traditional models of sharing information will be a timely contribution to an ongoing debate. Further still, as someone who identifies equally as a grassroots, community-based activist and a scholar, I am eager to address the absent and yet critical role community relationships have in making scholarship truly public and meaningful. 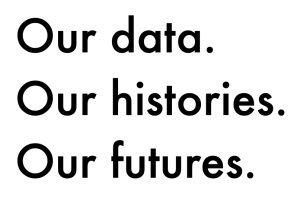